Fundamentally, an inline conveyor oven is nothing more than four sections: a heating system, an insulated box, a conveyor mechanism and a control panel. This article will focus on preventive maintenance of the heating system. The other oven sections will be discussed in future issues.

Each oven maker assembles the four sections in different ways, and this is what differentiates one oven from another. There also are differences in the quality and quantity of parts. Some ovens have specialized functions or added tooling. Finally, the methods used for assembling an oven will greatly affect the cost and ease of maintenance.

Spring manufacturers use various makes and models of ovens in their plants for a number of reasons: price and availability, presence of special functions, reliability of the oven and its supplier, as well as the ease of maintenance. These are probably the top reasons for selecting a particular model.

However, once you have purchased and used your inline oven for a few years, how do you know if it is still giving you the same performance as it did when new?

The good news is that a quality oven can last for 20 or more years if well maintained and not abused too much. However, the very operation of an inline oven subjects it to stress, and good old wear and tear. It has to withstand changing from room temperature up to 900°F and back to room temperature numerous times. As parts go through an oven, smoke, oily mists and other small particles become airborne, often becoming trapped inside the heat chamber. No matter how gentle you are with an inline oven, there are some parts that simply will wear out over time. Proper maintenance is by far the best way to protect your investment in this kind of equipment. Also, the more you understand what is going on inside an oven, the more you will begin to see that periodic downtime is really necessary to ensure a long useful life of the machine. Moreover, you can actually boost performance by following some of the tips and suggestions offered in this article.

Let me start by explaining the heating system. First and foremost, the heat source is usually electric heating elements. Heating elements basically do just two things: “go on” and “go off.” Nevertheless, a heating element has a limited useful life. The length of time you can use an element depends on its quality, of course; the number of times it goes on and off; and, to a lesser extent, its operating temperature range. (A fourth factor – the way electricity is sup­ plied to the element -will be discussed in the article focusing on the control panel). In the course of one shift, or even one production run, heating elements will go on and off hundreds of times.  Components in the control panel will determine how often they go on or off in order to get the chamber to a certain temperature.

In a small furnace with three to six elements, if one element burns out, you can usually notice an immediate drop in performance, since 17 to 33 per­ cent of the heating power is suddenly gone. In large furnaces, there can be 60, 72 or even 90 elements inside. If one element burns out in a large furnace, you may or may not immediately notice a change in performance. For this reason, in large ovens, it is imperative to check the elements individually on a regular basis.

There are several methods for checking an element, but the easiest is to take an ohmmeter and test for continuity. If an element is burned out, you will get a “nonsense” reading on the meter. (On our meter, the numbers flash “l.000”). With a good element, you will get a certain, steady resistance reading. The photo below shows how each end of an element is touched to test for continuity. Note: You do not have to remove an element to perform this test. However, you do have to remove any wires or jumpers from the ends to make sure you are testing only one element at a time.

Many inline ovens have elements wired in series, deltas or other configurations. This means a group of elements is working together. More often than not, a bad element will drag down the others directly connected to it. Therefore, if you find a bad element, you should suspect any other element with a direct connection to it. Elements do not slowly deteriorate until they go bad; they either “work” or “don’t work.” So, although it is possible to find only one element that has actually gone bad, be aware that other elements connected it will probably go bad soon, too.

Replacing an element is straightforward. Clam­ shell ovens afford the opportunity to open the chamber to assist threading the element through an oven. However, there is a risk of touching an element or other part of the heat chamber that is still hot. The easiest and safest way to change an element is with a standoff. A standoff directly connects the new element to the old one and, as you push the new one in, the old one will come out the other side. See the above photo of two types of standoffs. After replacing an element, make sure all the wire connections are tight and the terminals are snug. Anything loose or sticking out can cause arcing when electricity is returned to the oven.

The next item that should be considered is the thermocouple. Various types of thermocouples exist, and each inline oven company will use a style most suited to its particular oven design. No matter the style, you should know that typical heat-treatment temperatures for springmakers range from 400°F to 950°F, and J-type thermocouples are the fastest reacting and most accurate type in this temperature range. A thermocouple is basically two wires of different materials attached at one end. It is at this tip where the oven temperature reading is taking place.

The third thermocouple issue is perhaps the easiest to prevent but seldom checked until a severe situation develops. This is when oils and other particles build up on the tip of the thermocouple. All day long, oily mists burn off the surface of the wire being heat treated and, due to thermodynamics, a lot of it ends up at the top of the heat chamber. This is where most thermocouples are located. If a buildup occurs, it is similar to having the thermocouple positioned in the insulation. The temperature readings will become sluggish, thus affecting the reactivity of the oven. The oven will begin to operate erratically and in a wider range of temperatures than desired. Even if most of your applications use light oil or you only run light springs through an oven, it is recommended that you check thermocouples. The heat shield should be checked for an y buildup of materials on its surface. The more “gunk” that lodges up in the heat shield, the less heat that will reflect back down. Further, too much buildup of oil can potentially cause a fire. Standard cleansers that work on stainless steel can be used to restore a heat shield, but make sure the chamber is cool before applying them, and follow the directions on the cleanser’s label for further safety.

A standoff, such as these two types, is used to safely and easily change an element by directly connecting the new one to the old one and threading them through the oven.

The fused (good) tip of a thermocouple.

A clamshell furnace opened to reveal the heat shield, which prevents heat loss and reflects heat back onto parts.

These items can vary dramatically among oven makers and even from model to model from the same maker. All inline ovens need circulating air to even out the temperature inside the heat chamber. With­ out such air circulation, you will only have radiant heat coming from the heating elements, and very little heat transfer (heat treatment) will take place.

The most common method to circulate air is with a fan blade unit attached to a motor. Smaller ovens can be connected directly to a good-quality motor. Average-quality motors will consistently burn out quickly, so if you try to save money by using a cheap replacement motor, you will end up spending more through more frequent replacements. Large ovens absolutely require an indirect connection between the fan and the motor. In large ovens, the heat in the chamber would travel up the fan shaft and burn out the motor if the two were directly connected.

The fan blade unit rotates quite fast, so it must be balanced and properly secured to the fan motor. If even one blade got knocked off, the whole unit could become unbalanced enough that it could disintegrate.

A jam-up in the chamber could cause parts to pile up high enough to touch the fan blades. The unit needs to rotate freely in the space between the heating elements and the heat shield.

Furthermore, care must be given not to place the fan blades too close to the elements, as the elements can bend upward slightly when they get hot and could possibly get nicked by a rotating blade.

Another factor for allowing the fan blade unit to rotate freely is the condition of the fan bearings. The bearings must be able to withstand BOTH high speeds and high temperatures. This goes for the bearing grease, too. There are some bearing greases may be good for high temperatures but not necessarily for high rpm activity. Don’t skimp on the grease. Most oven makers recommend specific grease for their ovens in their user manuals.

In conclusion, there are several items that wear out over time in the heat system of an oven: heating elements, thermocouples and fan bearings. Each of these items can have extended useful life through care and proper maintenance, but eventually they do need replacing. Many old, beat-up ovens can be brought back to life in your maintenance department with a thorough cleaning of the heat chamber, and a quick check of the parts mentioned in this article. 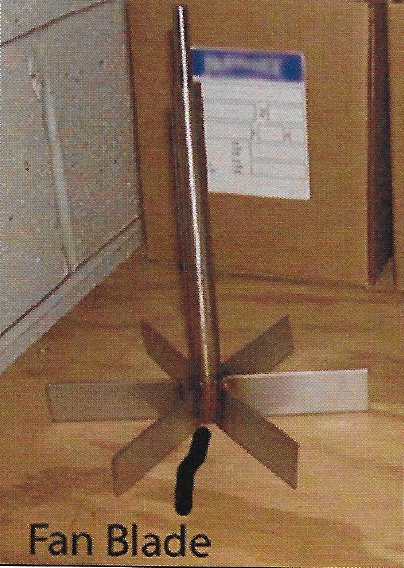